Possession of Nunchucks No Longer a Crime in Arizona

Nunchuck martial arts fighting sticks are a traditional martial arts weapon that originates from Okinawa, Japan. A pair of nunchucks, also called nunchaku, consists of two short sticks connected by a rope or chain. In the newly passed law legalizing possession of nunchucks, they were described as “two or more sticks, clubs, bars or rods to be used as handles, connected by a rope, cord, wire or chain, in the design of a weapon used in connection with the practice of a system of self-defense.” 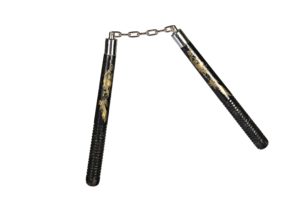 Nunchucks gained popularity in movies, usually martial arts films starring Bruce Lee. It was also used by one of the characters in the animated television show, Teenage Mutant Ninja Turtles. As such, people do not realize how dangerous they can be. Nunchucks were also notorious for being used in gang violence. In the 1970s, as Kung Fu movies soared in popularity, several states, including Arizona, prohibited the personal possession of nunchucks and nunchaku, with some exceptions, such as limiting the use in martial arts studios.

Recently, Arizona’s Governor Doug Ducey signed a law lifting the ban on nunchucks after decades of including nunchucks on the state’s list of “prohibited weapons,”  together with gun silencers, sawed-off shotguns, automatic firearms, grenades, and improvised explosive devices or IEDs.  This is a relief for martial artists who claim that they do not use nunchucks to commit crimes but only utilize them in preparation for martial arts competitions.  In Arizona, where it is legal to carry guns without permits or licenses, nunchucks were apparently, not even practical to use for self-defense.

With the legalization of possession of nunchucks in Arizona, only the following remain as the states that treat possession of this weapon as a crime:

Nunchucks Are Legal But Can Also Cause Serious Injuries

Like any dangerous weapon, nunchucks may hurt others, whether by accident or on purpose. You could be sued for hurting someone or damaging someone else’s property while you are using nunchucks. Since these are made of hardwood, metal, or plastic sticks, injuries brought about by a forceful strike can cause serious injuries. Nunchucks have been known to cause cuts, broken bones, concussions, and eye and nose injuries. Depending on the harm caused by your use of the nunchucks, you could be held liable in a civil lawsuit, worse, you could face criminal charges in court. As such, even if possession of nunchucks is already legal in Arizona, you should still exercise utmost care when using them. Keep them out of children’s reach and never attempt to use nunchucks under the influence.

With the new law legalizing the possession of nunchucks in Arizona, you may be able to buy a pair without any background check.  However, if you or someone you know have accidentally or intentionally injured someone using nunchucks, you may need to consult a criminal defense attorney. Your lawyer can review your case in order to plan the best possible defenses. Call our criminal defense lawyers in Arizona at Snader Law Group.