The U.S. State Department has declared the state of Arizona is a main destination and transit point for labor and sex trafficking, both nationally and internationally. Because of Arizona’s proximity to Mexico, San Diego and Las Vegas, the warm weather, infrastructure and freeways, and is the preferred venue for major conferences and a lot of professional sporting events, human trafficking has been very prevalent. According to the National Human Trafficking Hotline, Phoenix ranked 16th on the list in 2016 with 478 calls, making up 1.76 percent of calls nationwide. Of the human trafficking cases called in, eighty percent of the individuals trafficked were women and girls. The average age of human trafficking victims of sexual exploitation is 19 years old. Because of this, Arizona has some of the toughest human trafficking arrest laws anywhere in the nation.

On broader terms, human trafficking is defined as the illegally trading human beings for the purposes of reproductive slavery, commercial sexual exploitation, and forced labour as it occurs in the state of Arizona. If is often seen as modern slavery.  Based on its legal definition, to “traffic” means to entice, recruit, harbor, provide, transport or otherwise obtain another person by means of threat or use of force or other forms of coercion, of abduction, of fraud, of deception, of the abuse of power, or of a position of vulnerability or of the giving or receiving of payments or 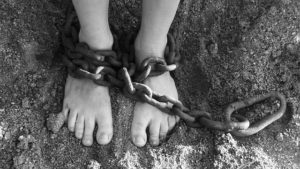 benefits to achieve the consent of a person having control over another person, for the purpose of exploitation. Forms of exploitation include the prostitution of others or other forms of sexual exploitation,  forced labor services, slavery or practices similar to slavery, servitude or the removal of organs.

Forced Labor as a Form of Human Trafficking

Under Arizona law, “forced labor” means labor or services that are obtained from a person forced to work through:

The only legal exception to the human trafficking offenses on forced labor is when it involves ordinary household chores and reasonable disciplinary measures between a parent or legal guardian and the parent’s or legal guardian’s child.

Penalties for Human Trafficking in Arizona

In Arizona, a person found guilty of human trafficking will face felony charges.

However, the specific charges you will face for your supposed involvement in human trafficking depend entirely upon what kind of trafficking you are accused of participating in. Following are the corresponding felony charges for perpetrators of human trafficking:

It is illicit to obtain labor or services through the use of bodily harm, threatening or restraining victim, and/or withholding victim’s personal records.

House Bill 2454 from 2014 was introduced to stop human trafficking by raising the penalties and improving the protective measures that both victims and vulnerable individuals are entitled to.

The severity of the penalty will depend on the aggravating factors. Trafficking of children and minors are the ones prosecuted most severely. If other crimes are involved with human traffickings, such as drug trafficking, or sexual assault or molestation of a minor, then you can face additional felony charges relating to those crimes in conjunction with human trafficking charges. This means:

Being charged with a crime can put your life in jeopardy. Human trafficking charges are very serious. It means lengthy prison sentences, enormous fines, and social stigma that can hound you for many years to come. As such, if you are fighting human trafficking charges in Arizona, it is smart to immediately seek legal counsel from an experienced, reputable criminal defense lawyer who will fight for your rights.

At Howard Snader Law, our criminal defense attorneys will leave no stone unturned in combating human trafficking charges so that you can have every possible legal option and defense strategy available to you. If you have been arrested and charged with any type of human trafficking crime in Arizona, contact us for a free initial consultation.