In the past, Arizona’s tough-on-crime stance resulted in some harsh penalties for drug-related offenses, even simple marijuana possession. That all changed in November 2020 when Arizona voters passed Proposition 207, also known as the “Smart and SAFE Act.”

Prop. 207 permits people who have been convicted for certain marijuana-related crimes to have those convictions completely expunged from their criminal record. 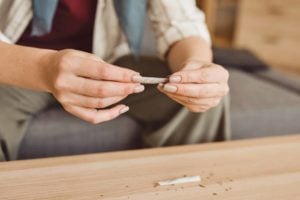 Before Prop. 207, if you had a conviction for a minor marijuana charge, you could not have it removed entirely from your criminal record. You could only ask the court for an order to set aside your conviction, but that did not remove the conviction. The conviction still showed up in public databases and background checks.

That was a little like a greasy burrito stain on your lucky t-shirt. You can wash it, Shout It out, Oxy Clean it, wash it ten more times, but the stain never really went away. You could still wear it around the house, but you can never again wear it on a first date or in the Friday night pool tournament.

So, even though you went through the time and expense of getting the order to set aside your marijuana conviction, it still showed up like that stain on your t-shirt every time you tried to get a job, rent an apartment, or go through any background check.

With Proposition 207, however, you can now get your marijuana conviction in Arizona completely expunged. That is cleaned, cleared, washed, and pressed, just like your new luck t-shirt.

Come One, Come All and Watch Your Marijuana Conviction Disappear

In most cases, when a law changes, it applies going forward and does not apply to convictions that occurred before the change. In the past, a change in marijuana laws in Arizona meant harsher punishments, but that is not the case with Prop. 207.

Prop. 207 is good news for those looking to clean the stain of a marijuana conviction from their permanent record. It allows virtually everyone with a minor marijuana conviction to have it completely erased from their record as if it never happened. Prop. 207 applies retroactively to all qualifying convictions for anyone convicted as an adult or adjudicated as a minor.

Which Marijuana Convictions Can Be Expunged?

In some cases, you may be eligible to expunge convictions for possession for production purposes or manufacturing or if you were convicted of possession of drug paraphernalia if that paraphernalia was related to marijuana (crack pipe NO, bong YES).

Since Prop. 207 completely erases minor marijuana charges from your record after the expungement. It erases the marijuana conviction that may have resulted in the loss of your civil rights. So, Prop. 207 also mandates that your rights be restored, including your gun rights.

So again, with Prop. 207, you can expunge your convictions, remove them from the public database, restore your civil rights, including your gun rights, and ultimately get the conviction out of the public system. It truly is a benefit to you to go through this process.

You Don’t Need a Lawyer to Expunge a Marijuana Conviction in Arizona!

When most Arizona criminal attorneys caught wind of Prop. 207, they thought people with marijuana convictions would be lining up at their door to hire them. Frankly, most people will not need a criminal defense attorney to get their marijuana conviction expunged. You should not shell out your hard-earned money to a criminal lawyer before you have at least tried to do it yourself.

On the Arizona State Court’s and Maricopa County Court’s websites, you can find a complete explanation of the process and the forms you need to request the expungement. It is pretty simple, so it is something that the average person could do on their own, even if with a stain on their lucky t-shirt. It is as easy as:

What if My Marijuana Expungement is Denied?

Providing your marijuana conviction qualifies and you have correctly completed and filed the forms, it is unlikely that your expungement request will be denied. However, if for any reason your expungement request is denied, you will want to get the reason for the denial. Typically, the court won’t just say, “denied,” without explanation, but you may need to ask.

Once you have the reason for denial, or if you cannot get an explanation for the denial from the court, give us a call at the Snader Law Group. It may be a minor error that you can fix, or it may be something more complicated, and you may need a criminal lawyer to explain it to you. Either way, we would be happy to sit down with you and see if there’s a workaround to get you what you need, which is a clean record.

If you have questions about Prop. 207 marijuana expungements or other criminal or family legal problems, please give us a call or chat with a live person on our website.