In my other life, I have been a sports official in multiple sports for more than 30 years. I am always amazed at 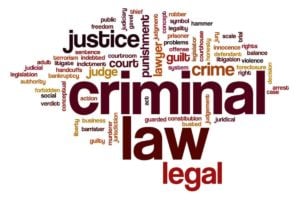 A couple of common examples are “foul tip back to the screen” in baseball or “over the back” in a basketball game.  There is no such thing as a foul tip to the back of the screen as it is nothing more than a foul ball.  There is no foul in basketball for being “over the back.”  It is only a foul if there was contact… And if there was contact, the actual foul is for a push.

Football brings its own unique twist on words and misconceptions.  In the rulebook, a catch is defined as obtaining possession of a loose ball in flight.  Yet on any given Sunday, all you need to do is tune into any given game to see how that definition is interpreted.

Just like in sports, the criminal law brings its own unique terms.  And, in many cases, the average person does not understand the actual meaning behind the words.  So, with that in mind, let’s discuss a few of these words.

One is arrested if they are being detained by law enforcement under the belief the person detained has committed a crime. Handcuffs are optional.  You can be arrested and never placed in handcuffs.   Law enforcement does not include school personnel or store security.  A gray area of the definition may involve a situation where the security officer is an off-duty officer in uniform. In interviews, I never ask an officer if they made the arrest.  My question is whether they detained the person.  Once detained, you have other rights in play.

You have the right to remain silent….  But it only applies when you are in custody. The issue becomes when one is in the custody of law enforcement. Officers and prosecutors try to hide behind “he hasn’t been arrested yet.” But the real standard is whether the person believes they were detained and not permitted to leave. Thinking in terms of a traffic stop… are you really free to leave?  Anything you say can be used against you.  Yet in many cases, officers will never Mirandize you.

This is the court proceeding in which you pronounce your original plea to the court. In most cases, even if you are guilty, you still start the process by saying “not guilty.” If you were to admit guilt at the arraignment, you may end up facing mandatory punishment or pleading to a crime when you may have legal defenses not yet explored. For that reason, most courts will only permit you to enter a plea of not guilty at the arraignment.

A plea agreement is a negotiated contract between the government and the defendant.  In most cases, the plea reflects a guaranteed outcome that has lesser penalties than the alternative of losing at trial.

Controlled by the prosecutor, not the court, when offered, diversion provides a means to avoid a conviction if the defendant completes the requirements of the program.  In many cases, the prosecutor’s require one to enter a plea agreement.  Entering the plea agreement, even if no conviction is entered, can have collateral effects on professional licenses, immigration status, and one’s driver’s license. Diversion is not always the outcome.

By statute, once you have been arraigned you have a right to a speedy trial.  Although it is your right, in many cases, it may not be in your best interests to push for a speedy trial. Mandatory punishments and a lack of time to locate evidence or pursue legal defenses often require your attorney to need time beyond the speedy trial time limits.

When one thinks of a criminal record, we look for convictions.  If you enter a guilty plea or have been convicted at trial, you do NOT have a conviction.  It is only a conviction when you have been formally sentenced.  In cases involving diversion, you may be forced to enter a plea, but no conviction is entered.  Hence, you have no criminal record. (But you may still have an arrest and court record.)

Possession may be actual or circumstantial. If you are physically holding an item, that is actual possession.  However, the item is in your car, in your home, on the sidewalk… it is in your possession if you have or could reasonably control the item.  A normal example is the glass pipe found in on the floor of the car versus in someone else’s backpack in the car.

Your best defense, at a minimum, is to consult with an experienced Phoenix criminal attorney. When facing any investigation for a misdemeanor or felony, it is a serious matter. Contact Howard Snader. He is a Board Certified Criminal Law Specialist. If you or anyone you know has been accused of any felony or misdemeanor, please call him at 602.899-1596, email him at [email protected] or visit

https://www.snaderLawGroup.com for your free case review.